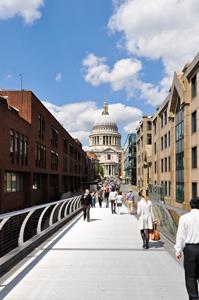 The City of London, often referred to as the square mile is a major business and financial centre, ranking above New York as the leading centre of global finance. It is the historic core of the capital and in the medieval period the City was the full extent of London, whose geographical borders have largely remained unchanged as Greater London gradually grew around it. Places of note within the City include The Bank of England, The Royal Exchange, Mansion House and St. Pauls Cathedral to name but a few, the area is also home to numerous restaurants and bars along with comprehensive shopping facilities.