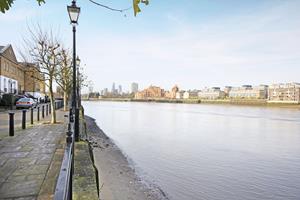 Located on a peninsula to the south bank of the River Thames Rotherhithe originated as a port and shipyard during the 12th Century, continuing to be so until the 20th Century. The area therefore featured a number of docks and quays many of which have in time been filled in while those that remain such as Canada Water, Surrey Water and Greenland Dock are now surrounded by modern residential developments which benefit from easy access to the City and Canary Wharf. Shopping facilities can be found at Surrey Quays Shopping Centre which includes a large Tesco Supermarket. Local train stations include Canada Water from which the Jubilee Line is accessible to Canary Wharf, alternatively the Thames River Bus can be used for easy access to Canary Wharf.