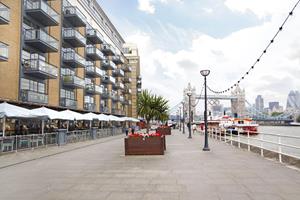 Located in the shadow of the magnificent historical landmark, Tower Bridge, Shad Thames originally housed the largest warehouse complex in London. The warehouses contained huge quantities of commodities such as tea, coffee and spices thus lending the names to many of the residential developments from which the warehouses were converted including Vanilla & Sesame Court, Cayenne Court and Tea Trade Wharf amongst others. The area is also notable for the Butlers Wharf development, converted by Terence Conran in the 1980’s to include luxurious apartments along with a ‘gastrodome’ triumvirate of restaurants overlooking the Thames and Tower Bridge. The area provides convenient access to the City either by foot within approximately 1.5 miles or bus routes accessible from Tower Bridge Road, the West End can be accessed via the Jubilee Line from London Bridge.