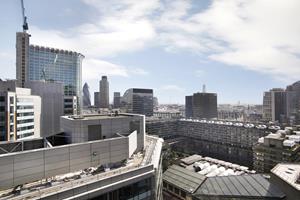 The Barbican Estate is a 35 acre residential estate built during the 1960s and the 1970s in the City of London, in an area once devastated by World War II bombings. It contains the Barbican Arts Centre, the Museum of London, the Guildhall School of Music and Drama, the Barbican public library and the City of London School for Girls. The complex is architecturally important as it is one of London's principal examples of concrete Brutalist architecture and, considered a landmark, is Grade II listed.

The complex was designed by architects Chamberlin, Powell and Bon and it consists of 13 terrace blocks, grouped around the lake and green squares within the complex. The main buildings rise for up to seven floors above a podium level, which links all the facilities in the Barbican, providing a pedestrian route above street level. Some maisonettes are built into the podium structure. There is no vehicular access within the estate, but there are some car parks at the periphery of the estate. Public car parks are located within the Barbican centre.

Shakespeare Tower, completed in 1976 - named after William Shakespeare;[5] and

Lauderdale Tower, completed in 1974 - named after the Earls of Lauderdale